IT Band Syndrome: Look for Your Glutes NOT the Foam Roller!

Raise your hand if you have had sharp pain on the outside of your knee or leg, maybe after running or hiking? Keep raising your hand if someone said: “Oh, just roll on the foam roller and you’ll be good to go!” I feel a lot of hands up right now.

I wish it was that simple. I do have some of my patients use the foam roller for myofascial release, but it is a teeny-tiny portion of the exercises prescribed to truly rehabilitate IT band syndrome. Is the foam roll helpful? Sure. But, excessively rolling on a piece of styrofoam tubing is not going to actually fix the injury or yield long-term results.

And, this is not just a runner’s injury, it’s a movement injury. If you walk, cycle, hike or climb stairs, this is a syndrome that could creep into your life one day. But, it doesn’t have to. Hip and lower extremity biomechanic training is the best, most-researched route to tackle this injury.

What is IT band syndrome?

IT band syndrome is sharp lateral (outside) knee or thigh pain that is commonly exacerbated by repetitive activity such as: running, cycling or walking. “IT” stands for iliotibial because of its vast expansion from the ilium (hip) to the tibia (lower leg). This syndrome is usually caused by tightness and/or irritation of the IT band. The big question: why is the  IT band tight and irritated?

Answer: THE GLUTES ARE WEAK. This  will make more sense in a bit.

In the past, this syndrome has been termed “IT band friction syndrome.” The thought was that the IT band was gliding across the femoral lateral epicondyle (bony bump on femur) at approximately 30° of knee flexion. When it became tight (from repetitive movement), the band would “friction” and become irritated over the lateral epicondyle. This friction would result in pain. However, new research is indicating something else may be happening.

Anatomy Associated with IT band Syndrome 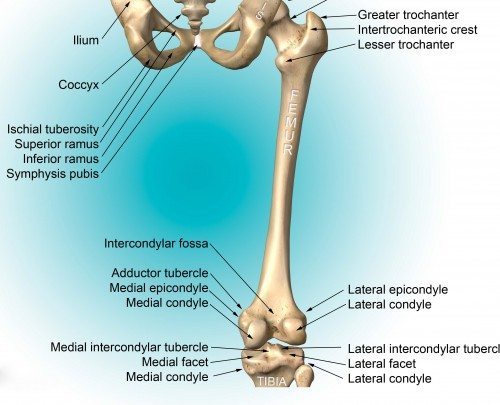 The iliotibial band is a thickened part of the fascia lata (deep connective tissue of the thigh) that spans from the hip to the knee. The band anchors from the ilium and travels down the leg to insert around the LFE and at Gerdy’s tubercle on the tibia. The gluteus maximus has a significant insertion into the IT band and current research suggests that the IT band could be considered a tendon of the gluteus maximus. Histology research (the study of tissues) supports this theory: the tissue from the hip to the LFE is similar to tendon and the tissue from the LFE to Gerdy’s tubercle is similar to ligament. The tensor fascia lata (TFL), quadriceps and hamstrings (front and back thigh muscles) also communicate with the IT band. 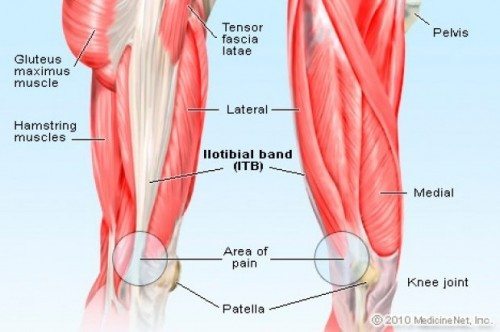 IT Band Anatomy: Lateral and Anterior View. Area of pain indicates the location of the LFE and the usual site of sharp pain. 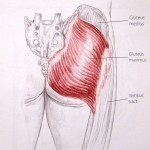 Gluteus Maximus as it attaches into the IT band.

Gluteus Medius. This is the main stabilizer of the pelvis and super important when the foot is on the ground. If the pelvis isn’t stable, nothing really works right. RECRUIT THE GLUTES!

What is the role of the IT Band?

Along with serving as an attachment site for the hip and thigh muscles, it resists the varus force at the knee (well, the hip too), but for now we will focus at the knee. Ok, the varus what?

Stand up and look down at your right knee. Now, step back with your left leg. Your right knee is exposed in front. Imagine a ball or child hitting the inside of your knee. First, ouch. Second, this is a varus force (medial force) against your knee and the IT band resists this force to protect the knee. Of course, our daily routine does not fear a blunt force on the inside of the leg, so how is the IT band continually resisting varus force?

Christopher Powers, PT, PhD has done some very cool research about ground reaction force vectors with walking and running. His research shows that when our foot strikes the ground, there is a varus force vector that consistently travels to the hip. This makes sense anatomically. Think of where all of our big, bulky hip and leg muscles are…on the outside, not the inside. Where is the thick IT band? Again, on the outside of the leg. These bigger muscles and thick fascia help resist the medial force vector (pain-free, mind you) when the pelvic mechanics are normal (figure A). However, if you change the pelvic position (figure B and C), the force vector changes and soft tissue stress or injury is a likely result.

A. Shows the normal force vector with a stable pelvis. Gluteus maximus, medius, core stabilizers and IT band are happy and healthy.

B. Shows the force vector moving farther away from the knee, so the IT band and outside structures have to work extra hard to resist the force vector. It also demonstrates what the pelvis does with gluteus medius weakness.

C. Shows the vector moving to the opposite side of the knee, resulting in medial knee pain and ACL vulnerability. It demonstrates a compensation of gluteus medius weakness. The pelvis looks level, but what you don’t see is the trunk bending over that pelvis, and that changes the vector.

So, if it’s not about the foam roller…what is it about? (in order of importance)

If you must foam roll, just a note: avoid rolling over the bony landmarks. It can cause bursitis at the hip and bone irritation at the knee. Stay on the main track between the upper thigh and knee.

Researchers (Fairclough, et al) are challenging the idea of the IT band moving across the femoral lateral epicondyle. Although research does show posterior (backward) movement of some IT band fibers with knee flexion, researchers are now asking this question: is the band actually moving or are the fibers being pulled posteriorly because of mechanics and tightness? The new thought is that the IT band, especially if dysfunctional and tight, is compressing a highly innervated fatty tissue between the band and bone. Highly innervated= lots of opportunity for pain. Continued research is in the works to test this new theory.

Whether the syndrome is friction, compression or tightness, research indicates that hip mechanics and strength are the main key to resolving this issue. Clinically, I have had excellent results with patients who present with IT band syndrome. As long as patients do their homework and find their glutes and core, the rest takes care of itself.