Freestyle Kick: Are you Sinking or Swimming?

Nearly every patient I see with some sort of pain from swimming freestyle has one common dysfunction. The pain can be in the form of low back pain, elbow pain, swimmer’s shoulder or knee pain. The common denominator is associated with lack of Gluteus Maximus activation and Core Stability during the kick. I have seen this in high level triathletes as well as club and collegiate swimmers. The Glutes and Core are not only important for kicking, but they also assist in making your stroke more efficient for body position. How? The Glutes and Core allow you to achieve proper body rotation in the water.

I grew up a club swimmer and went on to swim in college. I was primarily a breaststroker and IM’er, and was an  upper body dominant swimmer. I could do the breaststroke kick for days but when it came to freestyle I wasn’t very efficient. I realize now that I was dominating my kick with my Quads rather than fully using my Glutes. This lack of efficiency in my freestyle kick made me power through with my upper body. This ultimately led to a shoulder injury. This injury is what sparked my interest in physical therapy.

If only I knew then what I know now.

Kick From the Hip

As with most sports, swimmers have areas that tend to overdevelop. You often hear people describe swimmers as having broad muscular shoulders and strong Quadriceps. The Quads often become dominant during starts off the block, flip turn push-offs, and breaststroke swimming. The body then learns to use this Quad dominant movement pattern, making it hard to facilitate the Glutes. 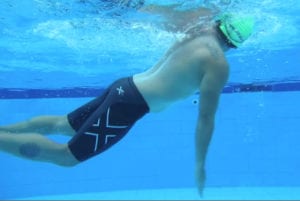 portion (hip extension). This lack of upbeat relates to poor Glute activation during the kick.  Athletes with a running background have an especially hard time with the extension portion of their kick. Why? Runners try to kick in a “run-like pattern” using their Quads for a knee dominant kick rather than a hip dominant kick. This kicking pattern results in muscle fatigue.

When a swimmer gets fatigued, the first thing affected is body position. The hips and lower body start to sink and this makes it hard to rotate in the water. This causes a chain reaction of dysfunction that can include: back pain, shoulder impingement, neck and elbow pain.

Here’s the Domino Effect in Swimming

The Muscles of Swimming

When people ask me what muscles are used when they swim, I usually say “all of them!” Swimming is a full body exercise and a good combination of a cardiovascular, respiratory and muscle workout. When it comes to the freestyle stroke, there is a constant alternation between contractions of muscles on the front vs. the back side of the body both in the upper and lower body. Knowing the muscles of swimming will directly influence efficiency. 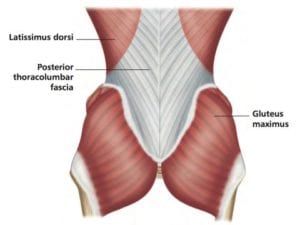 The posterior sling is made up of the Latissimus Dorsi and the Gluteus Maximus. This sling links the right Glute Max with the left Latissimus Dorsi (Lat) and vice versa on the other side. These muscles interconnect with the thoracolumbar fascia (a large thick band of connective tissue) to allow the body to work efficiently. This sling is extremely important for body position and rotation, which ultimately increases the distance you move through the water with each stroke. That means you swim faster.

As discussed earlier, the Gluteus Maximus helps with the upbeat or hip extension. It plays a role in posture and helps keep the trunk in an erect position. Not only is the Glute Max important for propulsion during the freestyle kick, it also assists the Lat for a more efficient pull down. 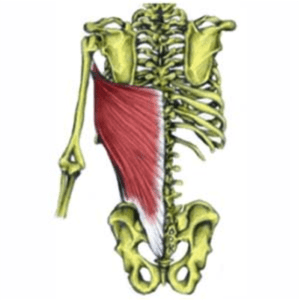 The Lat is also known as the “swimmers muscle.” It is one of the most developed muscles on a swimmer. Not only is the Lat is important for shoulder movement through the pull phase, it also assists in some of the rotation because of its attachment on the spine. If the Lat cannot anchor on the spine like it should (weak spine, poor glute strength) then the shoulder picks up the brunt of the load.

Dryland Exercises for the Posterior Chain

Want to work on your rotation, kick and body position in the pool? Try out these drills during your next pool workout:

©2018 ALL BLOG CONTENT at duncansportspt.com by Abbey Campbell, DPT

Abbey Campbell, DPT is a physical therapist practicing in Lafayette, CO at Duncan Sports Therapy + Wellness. Abbey is a former collegiate athlete swimmer and a new mother. She uses a whole-body, movement-based approach to heal injury and pain. Abbey is passionate about preventative care and patient education to get her patients back to happy, healthy movement.