Slip a disc? Back “go out”? Unfortunately, back pain is very common and ~60-80% of us will deal with it at some point.  Disc Herniations are one of the most common causes of back pain. Why? Because our body mechanics, core stability, posture and overall movement patterns are not what they used to be. We are sitters who then participate in very intense exercise. OR, we are sitters who sit a little more while watching TV at home. Moderate exercise is not the fad these days.

But one day you go to put on your pants or teach your kid how to ride a bike without training wheels and your back “goes out.” These simple activities have now caused extreme pain. For clarification, nothing slips or goes out in your back. But, the initial pain does feel like something might be broken back there. The good news? Most disc herniations will heal on their own without any surgical intervention.

The traditional system of treating back pain is long, costly and doesn’t get you to PT until WEEKS after your symptoms begin. The new system focuses on active recovery, not pain pills and rest. 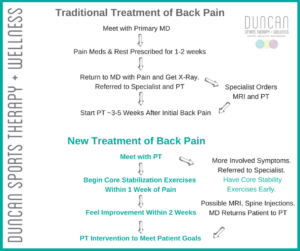 Research proves over and over again that in the short-term, a microdisectomy can help with symptoms. In the long-term (1 year+ later) there is absolutely no difference in the result of people who had surgery or didn’t have surgery. I’m not sure about you, but if the pain was tolerable, I would much rather work on core stabilization than have a surgical knife in my back.

What is a Disc Herniation? 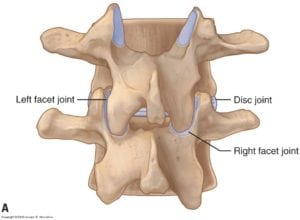 Our spine is made of vertebral bodies, facet joints and intervertebral discs.

The vertebrae give structure and stability to the spine to protect the the spinal cord and nerves. The facets joints (similar to a gliding hinge) guide movement in the spine. They determine the direction of the spine: forward, back, to the side or to rotate.

The discs create space for the nerves to run out, but they also allow for movement at each level. They also play a role in force attenuation, dispersing the forces equally throughout each segment.

So, the facets and discs allow for healthy movement of our spine.

The disc is made of the nucleus (left picture) and outside annulus fibrosus. The inside nucleus is a gel-like substance that allows for all of the good spinal movement. The outside annulus is made of rings that give structure to the disc so we don’t have gooey gel just running all over.

These annular rings are connective tissue and arranged in 10-12 layers of alternating diagonal patterns (//// \\\\ ///// \\\\\). This alternating pattern allows for a pretty tough ring. (right picture)

Disc herniations can occur with the annular rings partially intact or with a full disruption.

When a disc herniates, it presses out into the space where the nerve runs. If the herniation is big enough, it will start to press on the nerve. This is when we feel pain.

***P.S. This doesn’t mean to run to your local MRI shop and spend $1000 to find out if you have one. Just note, disc herniations can be common, but not problematic. It is the reason everyone should really work on core stabilization though!

A disc herniation has 4 stages. Each stage is a little more serious than the previous one.

Here’s a link to previous blog that talks about this specifically: NEVER Lift & Twist

What Are Safe Exercises?

Core stability exercises are the most important intervention for disc herniations and any back pain for that matter. The deep abdominals and back stabilizers get sleepy with back pain. So, we have to wake them up!

Note: These exercises are not meant to replace an evaluation with your physical therapist.

Until you can get in with your PT, these are safe on the spine. It’s imperative to start on core stability right away. The position of being on your hands and knees is usually the most tolerable and  lying on your side. Here is a video link demonstrating a few safe exercises: 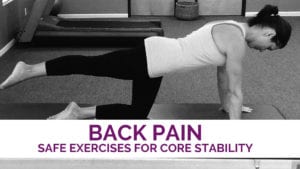 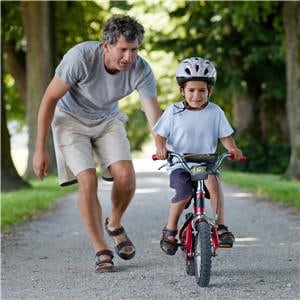 A 45 y.o. father and avid exerciser was helping his 5 year old learn to ride a bike without training wheels. His back was rounded over and he was running. After a few minutes, he said he suddenly went down on his knees in extreme pain.

His posture was immediately affected and had 8+/10 pain with walking, standing, sleeping and just being alive. He was pretty miserable. He did not state any pain into his leg, just left-sided back and glute pain. No loss of foot or ankle strength and mild numbness down his leg.

After 2 weeks of PT exercises for core stability, walking and upright easy cycling, he reported 50% improvement.

Six weeks after his initial injury, he reported 80-85% improvement. His back was stiff in the morning, but he no longer had pain and could sleep through the night. And, he had returned to the gym to weight lift, cycle and swim.

He did report he was doing his PT everyday and it was very helpful.

Do I know for sure he herniated his disc? No. My clinical experience thinks it’s highly likely. But, there was no reason to send him for an expensive MRI because he was improving. And, he represents the majority of all of us. Most of our disc herniations will heal naturally. They just require some patience and good PT intervention.

Case Study #2 – A Triathlete With a Really Messy Disc

Conservative treatment will never cause damage, but sometimes it’s not enough. Here’s a story of when surgery is the right intervention…

A 40 y.o. triathlete presented with left hip and hamstring pain. She had symptoms for ~6 months. She was training for the Boulder Half Ironman and was DETERMINED to finish it. However, running had become very painful in her hamstring. And, sitting was terrible. Her initial symptoms pointed to a hamstring strain.

After 4 weeks, she was feeling significantly better and back to running 5 miles.

3 weeks later, her pain returned. A visit to the ortho MD showed no disc space at L5/S1. She was referred to a physiatrist for an MRI which found a herniation at L5/S1. It wasn’t large enough to cause surgical concern at this point.

She tried 2 spinal injections and returned to training for her Half Ironman. With pain, she was able to finish her race.

8 months after beginning PT, she had a microdiscectomy (partial removal of the disc hitting the nerve) at L5/S1. Her pain resolved, and she returned to activity.

7 months later she returned to PT with symptoms again. She was training for the Boulder Half Ironman again. She was advised to not run and consult with her neurosurgeon. Her symptoms pointed to a possible re-herniation.

She had her 2nd discectomy a few months later.

One month after her 2nd discectomy, she emailed me stating changes in her bowel and bladder. I called her and told her to go to the ER. She had lumbar fusion at L5/S1. Goodbye Mr. Leaky Disc!

She’s doing fine now with moderate activity. This is the actual picture of her sequestered disc…unbelievable!

© 2018 and Beyond. ALL BLOG CONTENT at duncansportspt.com by Lori Duncan PT