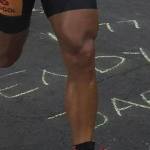 A few weeks ago, a patient of mine posted this photo to Facebook. She qualified for Kona this year and raced with the famous olympic speed skater, Apolo Ohno. At her PT session that morning we discussed lower leg biomechanics and the muscle development required to avoid injury during the next race season. I mentioned the leg muscles of professional cyclists and how their legs said: “Strength! Power!” A few hours later, she posted this photo with the caption: “Is it too much to ask to make my legs look like Apolo Ohno’s?” I instantly laughed and responded with: “Go speed skate for 20 years in a squat position and voila!” But, seriously, what is it about his muscular development that is key for a powerful cycle stroke? So glad you asked…

There are 11 muscles continually researched with EMG (electromyographic) studies.

Well, that is a lot of muscles! And, it doesn’t even touch on all of the stabilizers: gluteus medius, transverse abdominis, posterior tibialis, etc. The muscles listed above continue to be researched because their strength, development and timing are crucial for an efficient cycle stroke. So, the big question: “Which of these muscles are the main power guys?” 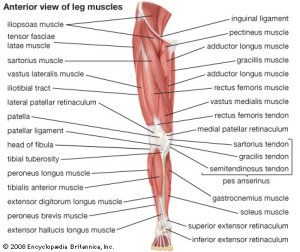 Note: All of these are monoarticular (cross only one joint) muscles.

The remaining 6 muscles are biarticular (cross 2 joints) and are more inconsistent as to when they activate during the cycle stroke. This inconsistency makes them unreliable as primary power producers but excellent helpers to balance the big 5 power players. This balance results in a synchronized, fluid, efficient, pain-free and strong cycle stroke. Isn’t this what every cyclist and triathlete is after? (Oh, and your legs look really good too!)

Clinically, the two cycling muscles usually out of balance are the Glute Max and VMO. If you’ve read any of my previous posts, you know I am a big fan of the Glute Max. This muscle is SO important and massively underdeveloped in almost everyone (athlete and non-athlete). In addition to a strong Glute Max, the VMO is a key player for optimal knee health and cycling power.

These two injuries are usually indicative of poor VMO and Glute Max strength. 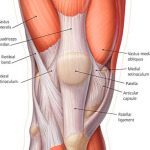 The VMO was first localized as a separate muscle in 1968. Until that time, it was considered as just “part of the quad;” isolating this specific muscle was ground-breaking research. The VMO acts as a medial stabilizer to the patella (knee cap) to keep the knee tracking correctly with the femur. The fibers run at an angle toward the patella, attaching to the quadriceps tendon. This angle gives the VMO leverage to stabilize against the strong vastus lateralis and rectus femoris. And, we know from research that these fibers have an increased angle in athletic populations (cool, huh?) For athletes, the median angle is 67.8º and for sedentary individuals the median angle is 53.6º. What does this mean? The increased fiber angle (or angle of pennation) allows for more muscle tissue to attach to the quadriceps tendon. More muscle tissue = more strength and power.

I mention the VMO because it has received some scrutiny over the past 10 years. The criticism: Why are we still doing VMO strengthening for knee pain? Many think this is an “old school” mentality and we need to look at the hip complex instead. When the VMO was first discovered in the 1960’s, rehabilitation centered around VMO strengthening for all knee issues. As the years continued, squats with a ball squeeze and the infamous

straight leg raise (picture on left) became the main-stay of PFPS and IT Band Syndrome. Clinicians completely ignored the hip complex and so the pendulum has swung the other way. Here’s the deal. We need both. We need the Glute Max and the VMO. And, we need balance between these two.

So, why is Pilates a good choice to strengthen the VMO and Glute Max? Because Pilates teaches proprioception (body awareness) to these two muscles, better than anything I have found on the gym floor. And, with good awareness of muscle firing, the gym strengthening is 1000 times more effective. Let’s consider a squat for a moment.

Stand up and perform a squat. What muscles do you feel? Likely your quad or thigh muscle. Maybe your hamstrings? Any glute? Do you feel the VMO?

The lack of body or muscles awareness stems from the brain and muscle having communication issues. But, this is where Pilates steps in and works its magic. Pilates creates awareness to muscles and allows athletes to transfer that to strengthening, sport and function.

Russian Lunge/Splits. This is my favorite exercise to train awareness to the Glute Max and VMO at the same time. The lunge needs to be low and the leg needs straighten from 90° to have an optimal effect. 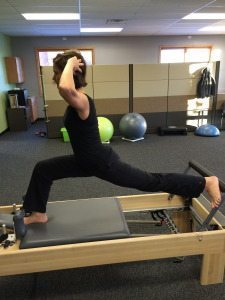 Benjafield A, Killinback A, Robertson C, Adds P. An investigation into the architecture of the vastus medialis oblique muscle in athletic and sedentary individuals: an in vivo ultrasound study. Clin Anat. 2014.